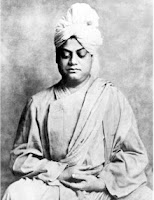 Swami Vivekananda was a Hindu monk who lived between 1863 and 1902. He was a chief disciple of the 19th-century Indian mystic Ramakrishna. You can Google him for quite a few interesting and inspirational quotes, but this is my favorite. For years after reading this, I wanted to find that Universal Religion.


Universal Religion
— Swami Vivekananda
If there is ever to be a universal religion,
it must be one that will have
no location in place or time,
one that will be infinite
like the God it will preach;
one whose sun will shine upon
the followers of Krishna and of Christ,
on saints and sinners alike;
one that will not be Hindu or Buddhist,
Christian or Mohammedan,
but the sum total of all of these,
with infinite space for development;
and one that with its catholicity
will embrace in its infinite arms
every human being,
from the lowest to the highest man.
It will be a religion that will have no place
for persecution or intolerance in its polity,
that will recognize divinity in every man and woman,
and whose whole scope, whose whole force,
will be centered on aiding humanity
to realize its own true, divine nature.